Alaska Department of Fish and Game

Why are Shorebirds Disappearing?
Biologists seek clues to yellowlegs decline

A once common, vocal shorebird has declined over the past several decades.

Lesser yellowlegs have declined by 70 percent – and more – across their range in recent decades. To learn why, biologists are looking at its summer nesting areas in Alaska, its winter feeding areas in South America, and its 8,000 mile migration in between. Katie Christie, a wildlife biologist with the Alaska Department of Fish and Game, is working closely with collaborators Jim Johnson with the US. Fish and Wildlife Service and Audrey Taylor with the University of Alaska Anchorage to gather more information on the species.

Johnson said a lesser yellowlegs, which weighs about as much as a deck of cards, is capable of flying nearly the entire length of the western hemisphere. For some birds, that's a trip between Interior Alaska and Argentina.

“The magnitude of their migration poses problems, and it’s hard to identify the exact cause of the decline unless we know what locations and habitat types they use,” Christie said.

To answer some of these questions, the research team is capturing birds in Alaska and equipping them with tiny, state-of-the-art tracking devices. Yellowlegs nest in a variety of habitats, from intact wetlands to more disturbed areas. After the chicks hatch, parents lead them to foraging areas such as mudflats and ponds on the Anchorage Coastal Refuge. Lesser yellowlegs are attentive parents, and they are also very vocal and keyed into sounds. Researchers capitalize on those traits to catch adults.

“We use recordings of chick calls to draw breeding adults into mist nets,” Christie said. “In Canada they use foraging calls to draw birds into nets after the breeding season. They’re very social, and the foraging calls will draw them to the speakers, they think, ‘this must be a good place to forage.’ We tried that here and it didn’t work, but the chick call works well, they really respond to auditory cues. The response is immediate, but it has to be just the right period in their breeding cycle, right after the chicks hatch.”

According to Johnson, adults respond to the call most aggressively when chicks are only a few days old and most vulnerable to predation. “Their reaction to the recording lessens as chicks age, until they become uncatchable,” he said.

Lesser yellowlegs are declining across their breeding range, which includes the boreal region of Alaska and Canada, and Christie is collaborating with a network of concerned scientists. Christie works for the Alaska Department of Fish and Game’s Threatened, Endangered, and Diversity Program. She collaborates with Johnson, Taylor, and UAA graduate student Laura McDuffie, whose master’s thesis focuses on lesser yellowlegs migration. Canadian researchers have also been happy to collaborate, and have contributed valuable data from four different field sites in Canada.

The research team caught yellowlegs on the Coastal Refuge and Joint Base Elmendorf-Richardson in the Anchorage area, and at Kanuti National Wildlife Refuge in Interior Alaska. Dozens of birds were caught, but not all were equipped with GPS transmitters. “We only put transmitters on adult birds that weighed more than 80 grams,” she said. “The transmitters weigh four grams — less than a nickel — and we try to keep the weight to under five percent of a bird’s body mass.”

A lesser yellowlegs with leg flags identifying it as a specific individual. The antennae of the tracking device extends beyond the bird's tail.

“During the 2018 season, we attached transmitters to 27 adults to determine how the birds responded. They did great, so in 2019 we and our partners deployed tags on an additional 60 birds across the extent of their breeding range, from Alaska to James Bay, Ontario, as well as a site used during migration in Quebec,” Johnson said. 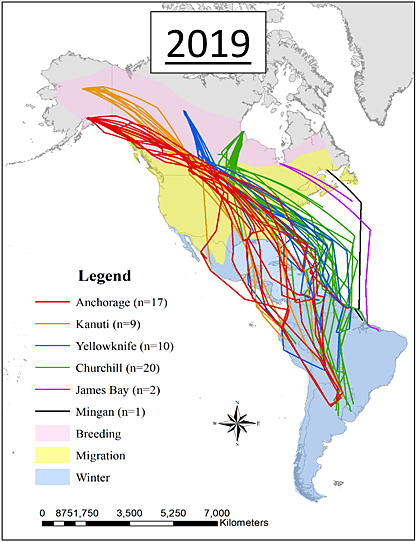 Christie said the GPS tags are much better than the devices used in the past to study bird migration.

“The older tags, called geolocators, are accurate to about 100 miles and you had to recapture the bird to retrieve the data,” she said, adding, “and it’s very difficult to capture a bird once it’s already been captured.”

She said the GPS transmitters record locations accurate to 10 feet, remotely transmit the locations to the Argos satellite system, and then data can be downloaded almost in real time. “We can get this amazingly precise information without having to recapture the birds,” she said.

The life of the GPS transmitter depends on how it is programmed. Each transmission takes some battery power, so researchers balance longevity with data collection needs. A location is registered every two days and transmitted in batches of three, so every six days information is uploaded during fall migration. They take a break during the winter, waking up to record locations in January, and then again in April to record the spring migration.

“We want to know their fall migration routes, whether they survived the winter, and what migratory routes they are taking on their way back.” Christie said.

The tracking study has provided a lot of interesting information. The female takes off first for the winter grounds, the males stay around much longer to care for the chicks until they are independent. Females are bigger than the males and they tend to fly farther. Some of the females fly all the way to Argentina. Christie said many of the migrating birds stop over and congregate on the prairie potholes in southern Alberta. Once they hit the southern US border they really spread out. Other destinations include Cuba, Venezuela, Mexico, Bolivia, Brazil, Suriname, Haiti, and Ecuador.

Although 44 Alaska yellowlegs have been equipped with tracking devices, more than 100 have been marked with an engraved flag attached to a bird’s leg. Every flagged bird has its own unique two-letter code, and re-sighting these birds provides important data.

“We are individually marking birds so that we can determine which birds return in subsequent years. We can use this information to estimate the number of birds that survived, which is one way of assessing how well a population is doing,” Johnson said.

A lesser yellowlegs in flight, the antennae of the transmitter can be seen, as well as the leg bands. Photo by Matthew Danihel

Although it’s called a mark-recapture study, the bird doesn’t need to be actually recaptured, just re-sighted through binoculars, scopes, or cameras.

“People watching shorebirds in the Anchorage area can provide useful information,” Christie said. “We banded quite a few birds along the coastal refuge. Hopefully next year we’ll have people calling in with sightings of flagged birds.”

Christie noted that birds will not be returning to one formerly prime Anchorage area. “One location that had a high density of breeding birds has changed. Beavers built dams, flooding the entire wetland and we lost the margins of lake that were optimal for foraging.”

Many species of shorebird are declining world-wide, and numbers of lesser yellowlegs are definitely declining in Alaska. These declines are consistent with other range-wide trends. Lesser yellowlegs are found throughout the boreal forest across the U.S. and Canada, and the cumulative decline across their range has been 70 to 80 percent since the 1970s.

The trends from Alaska are based on the North American Breeding Bird Survey and the Alaska Landbird Monitoring Survey. Citizen scientists and biologists survey birds across Alaska using a standardized protocol. The two surveys are complimentary and provide good long-term data on bird populations.

Recent reports indicate that between 2003 and 2015, lesser yellowlegs declined by five percent each year according to the Breeding Bird Surveys. In that time period the Alaska Landbird Monitoring Surveys indicated a steeper decline, about nine percent per year.

Declines have also been detected in other parts of their range. “Canadians are paying attention to this species,” Christie said. “They are monitoring them during breeding and migration, and those counts also indicate declines.”

“We’re trying to figure out what is happening”

“There is a hunting element”, Christie said. “Yellowlegs are hunted on their wintering grounds. There is substantial shorebird hunting in countries including Brazil, Guadaloupe, Barbados, and French Guiana”.

“Tens of thousands of shorebirds are hunted for sport and subsistence each year, and lesser yellowlegs are one of the most commonly harvested species,” she said. She also mentioned that the harvest is better regulated in some areas than others.

“There is a whole host of potential threats,” she added. “We’re interested in which segment of the population is most vulnerable to hunting. We want to know if Alaska birds are going to that region, and if not, what else might be affecting them.”

Other factors could be pesticide use in agricultural areas, habitat loss due to conversion of wetlands to agriculture, a decline in populations of the invertebrates that feed shorebirds, and “shoreline hardening” in coastal areas, where wetlands are developed or literally paved over.

“We know development in the Yellow Sea in China has contributed to the decline of several shorebird species,” Christie said. “A huge amount of development has gone on there in the past decade, and it’s thought to be a major threat to those birds, because it’s a very important stopover area. Shoreline hardening has also been identified as a threat to lesser yellowlegs on their South American wintering grounds, although little is known about the rate and extent of this development.

Yellowlegs blend in well. Their distinct call is a good clue to their presence.

“Nesting biology is another piece of puzzle – how well are these birds doing when they are in Alaska. Are they able to successfully nest and raise young, and could low reproductive rates contribute to the decline. We have placed motion-triggered cameras at a few nests to identify causes of failure,” said Johnson.

Researchers are looking at nesting birds in Alaska to learn more. But Christie said yellowlegs nests are almost impossible to find.

“We are trying everything to increase our ability to detect these nests, including using trained dogs to sniff them out. It can take hours of searching to find one nest. These ground nesters are very good at hiding. They blend in perfectly, and they sit tight.”

Alaska researchers plan to produce an educational video on the plight of yellowlegs in the next few years. They hope to reach audiences in North and South America and will translate the documentary into Spanish, Portuguese, and French.

Outreach potentially received an unexpected boost this summer when researchers were joined by a film crew from Australia. The documentary crew was looking for ideas for a series about shorebirds called “Flyways,” and recorded enough video to create a short piece to pitch an entire segment on yellowlegs to the producers. 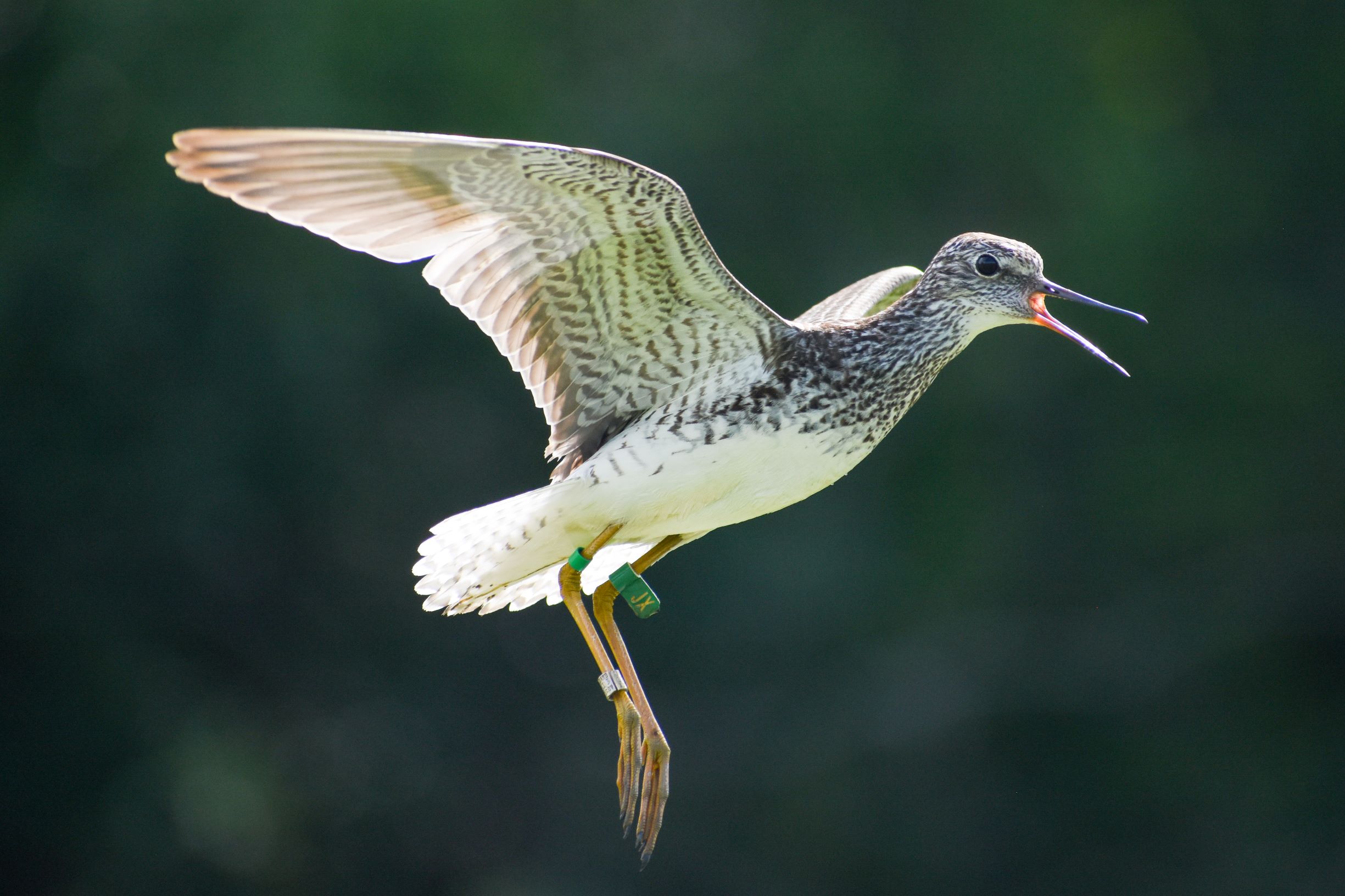 “They are going all over the world looking for ideas and they came to the American Ornithologists’ meeting in Alaska,” Christie said. “They came to the shorebird session and interviewed several Alaska scientists. We were hoping that this species would capture their hearts.”

For more information about the lesser yellowlegs project or to share sightings of flagged birds, please contact Katie Christie at 907-267-2332 or katie.christie@alaska.gov.

Riley Woodford is the editor of Alaska Fish and Wildlife News and produces the Sounds Wild radio program.

Short video of yellowlegs with chicks foraging in tall grass

Receive a monthly notice about new issues and articles.